I have an admission to make.
I am a shoe geek. (First step to recovery is admitting you have a problem...)
Although plainly obvious to anybody who has been reading the blog for a bit, or to those who come through Maine Running Company whenever I happen to be working, this is an important consideration when it comes down to gear reviews. I would state that I'm the Jeffrey Steingarten of the shoe world.
In other words, I am one tough bastard to please. I'm also incredibly loyal when it comes to my footwear. All season, I spent my time in Saucony's shoes, switching in April from the Kinvara that I had reviewed here, to the Saucony Mirage (same platform, just a mild amount of pronation control from the plastic footbridge). So it was with a great deal of skepticism when I stepped into a pair of K-Swiss Kwicky Blade Lights, and began reviewing them. 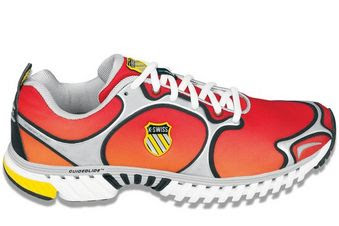 The Techno Babble
The Kwicky Blade Light is K-Swiss' entry into the performance trainer market, with a mild amount of pronation control offered by both a mild medial post and a small thermal polyurethane shank. This means it has competitors coming from all sides: the Asics DS-Trainer, the Brooks ST5 Racer, the Saucony Mirage and Fastwitch, the Mizuno Wave Elixir, the Pearl Izumi Iso-Transition, the New Balance 1190, the Zoot Ovwa...this field is crowded.
However, K-Swiss has also positioned this shoe into the triathlon world, as well it should: as the run sponsor for Ironman, and with the Raelert brothers among others under sponsorship, it has a leg up in that market. To that extent, the Kwicky Blade Light also features drainage holes, and a tab in the back end to ease entry into the shoe in T2. They also are a seamless upper, so if you choose to go sockless, you may without worrying about rubbing into some stitching.
But what about water getting into the shoe? Like, say, if you're melting on the run at Timberman and taking sponges and ice left and right to cool off? Say, like, this guy? Well, you're in luck: the Blade Lights feature what the call ion-mask: a water-resistant upper to help prevent some of that moisture getting into the shoe.
According to K-Swiss, the shoe comes in at a very competitive 9.0 ounces. Of course, in my size 12.5, I have to take that with a whole shaker of salt, but at least it gives us a good idea of where it slats in. This is approximately .3 ounces heavier than my Mirages.
Enough babble. How do they run?
In a single word: awesome.
Full disclosure time: I wanted to hate these. After being incredibly disappointed in triathlon specific shoes over the years, I had figured that these would be more of the same. Great marketing, great concept, and lazy execution leading to an un-runnable shoe.
Boy, was I wrong.
The intial try-on feel is a little unassuming. You step into the shoe, and it just kinda feels, well, there. It's not something that lends itself well in a $135 shoe. When you put on a shoe that is anywhere from $25-$35 more expensive than its' competition, you would expect a more luxurious try-on feel. This shoe is not in your face about it's cost when you slip it on.
Instead, feel is more subtle. Think about the things you DON'T notice, and that's where this shoe starts to come alive with try-on. You don't feel pressure points from the upper, because of the seamfree construction. The posting is also relatively subtle; you don't really feel it guiding your foot through a gait cycle so much as it's just doing it.
The one thing you really do notice is how well cushioned it feels for something lightweight. This is the Blade Light part of the name, as you have some vertical compliance available simply from the spaces in the midsole itself. Overall, it gives a cushioning experience more akin to, say, an Asics Gel-Nimbus than it does performance trainers, while giving you that impressive lightweight feel.
Running in the shoe is where that $135 really feels like money well spent. (Well, not that I spent the money on it, but it's where the shoe justifies the cost.) I spent plenty of time in the shoe at various pace levels, ranging from recovery runs all the way down to outright sprints. I found the shoe to be happiest from aerobic threshold pace on down to the sprinting. It's not so much that the shoe does not like to be run at slower speeds; it's simply that the shoe likes good run technique, and it gives you more back the better your form is.
By this, I mean that the shoe likes to be run at a more midfoot point, with a higher cadence. Slower cadence seems to make the shoe a little marshmellowy, and you can hear it bottoming out a little bit. I fear what a larger runner would feel in this shoe if they were happily heel striking their way along. On the other side, running all the way forward on the foot, and the shoe feels too flexible to sustain that form for very long periods of time.
Instead, think more Cait Snow with the gait: short steps, underneath the center of gravity, good posture, and run like hell. Feedback from the ground will tell you the pace you are running; you'll feel the shoe engage a little bit more; it almost tenses up a touch, to say that, "Hey, we're moving here! You stay relaxed. I'll do the work." It's comforting.
I also tested the ion-mask technology with runs occurring on rainy days, as well as with it being stinking hot one day. It is both breathable, and protects the foot. Of course, if you submerge the shoe, your foot will get wet. But it does drain out pretty quickly, and if you are wearing some quick drying socks (my personal favorite match with these are the Feetures! Elite socks), you'll stay blister free.
In sum: this is an excellent addition to the K-Swiss line-up, and I'm happy to say that they are in my shoe arsenal. I'd gladly purchase a second pair. Don't make the mistake of thinking this is just for triathletes because they're K-Swiss, nor because they are as responsive as some other shoes. They want to go fast, and be run in well. A great shoe that earns my highest recommendation.
Bravo, K-Swiss. Bravo.
Posted by Ryan at 5:20 AM 3 comments: