There will come a point in every athlete's career when he or she will realize that in order to improve, one must be able to properly reflect on the work that has previously been done. You must process what worked, what did not work, and at what frequency to be able to further make decisions down the road.
But what to keep track of? And how to keep that organized? Sure, you could go the approach that I utilized last year: the wondrous 300 page notebook. But that only works for reviewing stuff later, as you'll have whatever plan that you're trying to follow in some other place, as well as the data from your Garmin, or Timex, or whatever other training tool that you use.
Enter TrainingPeaks. 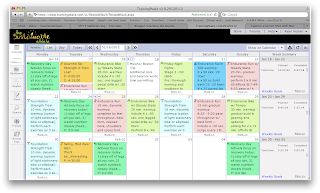 TrainingPeaks, at its core, is a training log. But it's also a database of thousands of workouts, a data manager, a nutrition guide, a training plan...it is as much or as little as you plan to get out of it.
My coach, Doug, has used TrainingPeaks for a while for his athletes. He will generally build a certain time period worth of workouts out into the future. (So, the screen shot above? That's my current week's training. Yes, you get to see my mediocrity in person!) I, as an athlete, dutifully follow the plan and upload the data from my Garmin into TrainingPeaks. We then review the data generated to see how things are working out: is what we are doing helping? Is it reaching a level of toxicity where it would be better for me to rest? These are all things that allow us to work with one another.
By that end, TrainingPeaks is a dream. Because it allows us to be linked together, I get notifications when Doug has changed something within the plan. But I also gain the flexibility to move workouts around when life gets in the way. (Note: this is a Premium feature within TrainingPeaks, which requires a paid service membership. Basic accounts are more simple training logs, and there are free workouts, but no more than that.) Take, for example, this past week: I originally was supposed to have two workouts on Monday, a day off on Tuesday, and just a run on Wednesday.
Well, I woke up lethargic and stiff as all hell on Monday. Knowing myself, that swim and strength session would have been an unmitigated disaster. So I took that as a day off, planning to perform them Tuesday. Life got in the way on Tuesday, as Mrs. Crashing the Boards had a follow-up appointment and neurological exam. In other words, this was a "honey, you WILL be there with me, right?" moment.
So I swam and ran today. And I had the ability to drag and drop workouts throughout. Easy! Plus, with the added "post-workout" comments, it allows plenty of space to say what felt like it was working, and what wasn't.
Still, as with anything, TrainingPeaks isn't perfect. For the life of me, I can't get my Garmin to work with their Device Agent. This means that in order to get my Garmin file to attach into their system, I must first upload it to Garmin Connect. Then I export a GPX file out of Garmin Connect back onto my MacBook, and THEN I get the pleasure of uploading it into TrainingPeaks. It takes forever to do. Also, it is then quite slow to recognize the device file when trying to go back and look at it. (I find it far easier to just look at previous times using Garmin Connect, and then seeing the notes in another tab using TrainingPeaks.)
Another user-unfriendly note is that the layout leaves a fair bit to be desired. Although the calendar layout of the page gives you a good look at the workouts that are about to be done (or recently have been accomplished), it is difficult to access into the many workouts, Annual plans, etc. It almost seems like the page was optimized for mobile viewing, rather than on a physical computer.
Still, there's so much to like here. I love having the flexibility to move my workouts around as necessary to get them in; I love being able to have one home for all of my data (even if occasionally it leaves something to be desired); and I love being able to see all of the work that I've done in a single page view. You can keep track of meals, equipment, etc. How much did I eat? Why am I not at race-weight? Should I replace my shoes? All questions that you can use TrainingPeaks to answer.
Overall, it's in my opinion the only worthwhile method to keep track of your training, and even moreso if you are working with a coach. The days of an e-mailed schedule in a Google docs file are over.
Thank God.
Posted by Ryan at 1:00 PM 4 comments:

Holy crap!
Yes, Team Rev3 is running across America to fundraise for the Ulman Fund, which benefits young adults with cancer. As you're more than well aware here in this space, cancer made a huge impact on my life and is part of the reason why I'm even involved in the sport of triathlon today.
A new gadget on the side of the page will be the fundraising tracker, which shows our goal of $100,000 by the end of the run.
Things kick off on Monday, March 26th, from Oceanside, CA. The run will take 21 days to complete, finishing in Washington, DC. Members of Rev3 staff and Team Rev3 will be on hand to keep plugging on miles.
To donate, please use the gadget on the right. To find out more, head on over to Rev3's Run Across America page, including times that they could use help running, etc. I'll also be posting more about a Team Matching program, whereby members of a triathlon club or team can fundraise and run virtually against the Rev3 crew. Prizes will be given to the top team!
In all, I'm honored to be a member of a group trying to do so much for charity. It really shows the character of the organization; I couldn't be luckier.
Posted by Ryan at 5:16 AM 3 comments:

"I did what I had to do; if there was a reason, it was you..."
--Eddie Vedder, "Footsteps"
Another minor admission: I'm a ski bum at heart. I'd kill for the opportunity to spend a winter patrolling for one of the mountains in New England, to help other's enjoy the bounty that Mother Nature reaps for us every December through April, and sometimes May.
So as it stood, it was time to begin my yearly trek to the northwest. This year's exploits come courtesy of Boyne Resorts, and their holdings in New England: Sugarloaf, Sunday River, and Loon Mountain.
Sugarloaf, by all accounts, is the gem of the three. Sure, Loon is easiest to get to (especially coming from Massachusetts and points further south). Sunday River has a more upscale feel, and will generally be the moneymaker for the operation. But it is Sugarloaf that stands above the others. Yes, it is taller than the other two. But it also has a character, a steadfast resolution. You come here to ski, and that's both the mountain's biggest draw as well as the reason why Sunday River draws more people to it.
Fine with me; I'll just keep on lapping.
"Would you say you're feeling low and so a good idea would be to get it off of you're mind?"
--Dave Matthews Band, "The Best of What's Around"
This trip to Sugarloaf was bittersweet for me. The last time I'd been to Carrabassett Valley, I was skiing angry. I was attempting to clear my mind, as my father-in-law was in the midst of his fight against sarcoma. In my anger, I managed to wind up blowing out a ligament in my thumb. I skied the remainder of the day (hey, it was 50 degrees, the Backside was open...I felt justified), but I had the distinct displeasure of having hand surgery to repair the torn ligament. For those wondering, it's glorified carpentry.
Anyways, coming around the mountain on Route 27, and I felt...home. I was a Saddleback passholder last year, for a few reasons: it was all I could afford, but more importantly, I don't think I was ready to have gone back. I was simply lost emotionally. Whether or not I've found myself is an entirely different question, but at the very least, I was ready to head back.
"Gimme some hope I'm coming through...I'm counting on you."
--Foo Fighters, "Rope"
Thankfully, I wasn't alone on this trip: Josh, my ski buddy (a.k.a. "The Guy Who Has a 3-Way with My Husband and a Mountain, according to Mrs. Crashing the Boards) was along for the ride. He's also the guy who introduced me to Sugarloaf, was a member of my wedding party, kick-started my craft beer drinking, helped me through dealing with the loss of Peter...he's everything you could ask for out of a friend, and then some. Stand-up guy.
Anyways, we got ourselves northward and all ready to go by 8:35. First chair was 8:30. Considering that it's two hours and fifteen minutes from Portland to Sugarloaf, and I had to pick up my ski pass...we know how to get to the mountain to get going. Plus, there was some fresh snow from about mid-mountain on up...and we needed to attack.
Heading up the SuperQuad is when I just about lost it, letting Josh know about the last time that I'd been there, skiing to forget, when in his genius, said, "Well, now you get to ski in his memory." It's amazing how a few words can simply jar one into a positive mindset. And that'd be the motto of the year: Make some memories. That, at its heart, is why I ski; for the sheer enjoyment of it, to be constantly amazed at what the Earth and the weather have provided for us, and how we have been able to take and shape it into a sport.
The number of trails definitely leave something to be desired, and just about from the top of the Whiffletree quad on down, with the exception of Tote Road, things are sketchy at best and downright awful at worst. But the skiing was sublime further north on the hill, with fluffy snow from the night before making for a feel of January despite the lackluster snowpack further down.
Then, as if on cue, it started to snow. I looked up at one point, just saying, "Thanks, Peter, for the gift..." as we continually received free refills on the fresh snow. It snowed like hell, off and on, just enough to keep filling in the tracks and leaving places for you to really attack. It was everything one could ask for: good skiing, good people along for the ride.
Memories, indeed.
Posted by Ryan at 5:06 AM No comments: