Every New Beginning Comes From Some Other Beginning's End: 2013 Recap and 2014 Preview

Well, then. That didn't go as planned.

2013 has been a hell of a year. There's been many ups and many downs along the way. To recap, in short order, the year since January:

Had to buy (another) new bike.
Started training for the full-distance race at Cedar Point.
Enjoyed the remainder of ski season with my best friend, Josh.
Started masters swimming.
Worked the Boston expo, was supposed to be there on Marathon Monday, and wasn't because Hannah's grandfather was so ill.
Lost Hannah's grandfather.
I got hurt.
Went to Quassy and had the whole Control-Alt-Delete experience.
Went to Williamsburg and came home with a big decision to make.
Decided to move to Virginia and join the workforce of Rev3.
Moved and sold said new bike.
Got on board a new old bike.
Swam/biked/ran some.
Went to Wisconsin. Trained. Came back.
PR'd at Rev3 Maine.
Got ready for Cedar Point.

And then Cedar Point happened. To spare you all many of the pretty disturbing details: I swam what I wanted to swim, right around 1:10 (1:11:XX). Got out and ran out onto the bike. Went very light on the pedals to start the effort.

Almost immediately, I couldn't put anything into the system. Just felt terrible. But I still had good legs, kept the effort right at that easy level. Felt like I could go all day. This went until I started vomiting at mile 60, which counted for the remainder of the bike. Awesome.

Right around mile 90 I knew my day would come to an end at the end of the bike, but I couldn't do it myself. I needed Hannah there to help make the decision for me. And we all decided that yes, I should bag it. I then took my third trip to the medical tent of the season, where I found out I lost a little more than 5% of my body weight throughout the effort.

2013's been a hell of a year. I can't complain about anything. But, as the post title suggests, there's a lot to be changing.

I'm incredibly thankful of the coaching I've received via Doug Welling of The Sustainable Athlete over the past two seasons. I wouldn't be where I am in the sport without him, and his methods are second-to-none. I can't speak highly enough of him. If you're reading this, and you're in New England, and you want an awesome coach: Doug's your man.

That said, I felt with my move to Virginia, it was also time to start shaking things up on the athletic front. For 2014, I've decided to head on with John Hirsch of Evil Racing Cult/CREW fame. Seeing as I've been pilfering some of his phrasing for a while (including the trademarked blanket of hatred and self-loathing one), it was high time to sign on up. I'm excited. We've hit it off well with schedule building for 2014 and seeing where things will take us.

In the interim period of recovery (hey, when you look like this at the end of a race, you should probably take some time off): 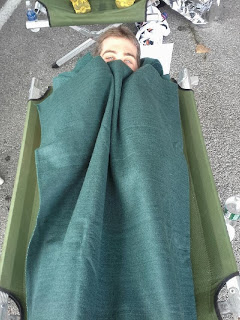 I've been enjoying running and riding as I see fit. And dreaming big. Although I was planning on taking my shot at Kona 2014...well, we've pushed it back. And this is where I think working with John will be good for me: to dream, then draw up the appropriate plan of attack to get there, which may mean putting it on a different timeline than initially anticipated. And so 2014 is dedicated to working my ass off to get to where I want to be.

So where shall it take me? Well, that's for another post. But I'll be doing some things I haven't done before: open marathon with proper training before it; a little cycling event called Battenkill; and more.