Oops I Broke My Spine.

WARNING: Some of the images below are not for the faint of heart. If you're not interested in seeing what it looks like for a human to go from 25 MPH to 0 in .8 seconds using their helmeted head, shoulder, and handlebars of their bike as the braking mechanism,  DO NOT SCROLL ONWARD.

There are two kinds of cyclists: those that have crashed, and those who will.

Although I'd been brushed by a car back in 2011, and had the occasional stoplight mishap when adjusting to new cleats...I had never truly crashed.

That all changed last Sunday.

As you all know, I had been training for Rev3 Cedar Point. Hard. I had DNFed here last year. I had put all my eggs into the basket for this race. I was committed to giving this race 100%. Training has been spectacular (hence the lack of updates). Swimming faster than ever. Good efforts on the bike. Runs were a little lackluster, but I was really looking forward to dialing it in over the last couple weeks heading into the event.

Hence the workout on Sunday: 100 miles on the bike at race effort, then 8 mile effort starting conservatively and then picking up the pace so that the total effort would average out to race pace as well. There were 3 of us starting the ride, then we would pick up a 4th along the route and keep chugging along.

We were coming into our turnaround point of North Berwick. Two of us had put in about a 40 second gap on the other duo. I got dropped from the front guy and so we rolled in towards town. As it was unfamiliar territory, I immediately got myself out of aero and onto the base bar.

To paint the scene, there was the guy in front. About 50 yards behind him was a car. 50 yards back of that was me. We were turning left and got into the left turn lane. There was a car oncoming that did not have traffic behind it. Guy up front signals the left turn. Oncoming car signals turning right. Stalemate ensues. Car behind brake checks hard. I go to brake.

I don't know what action put me on the ground. After review, there was a bump in the road there. Maybe I hit it while not balanced well. Maybe I just hit too much front brake. I can't honestly say. And I can't say I know how I flew through the air, etc. I just know I went very fast from being upright to being on the ground.

I could feel that my helmet had hit hard. I was flat out on my back. I tried to take stock of the situation. I went to get up, and a crushing pain in my chest stopped me. I couldn't take a deep breath.

My fellow riders came back upon me. One stabilized my neck. The other two helped direct traffic and the scene. Luckily, I suppose, I'd crashed about 200 meters from the fire station.

Here's what things looked like about five minutes after the accident.
*WARNING: Graphic.* 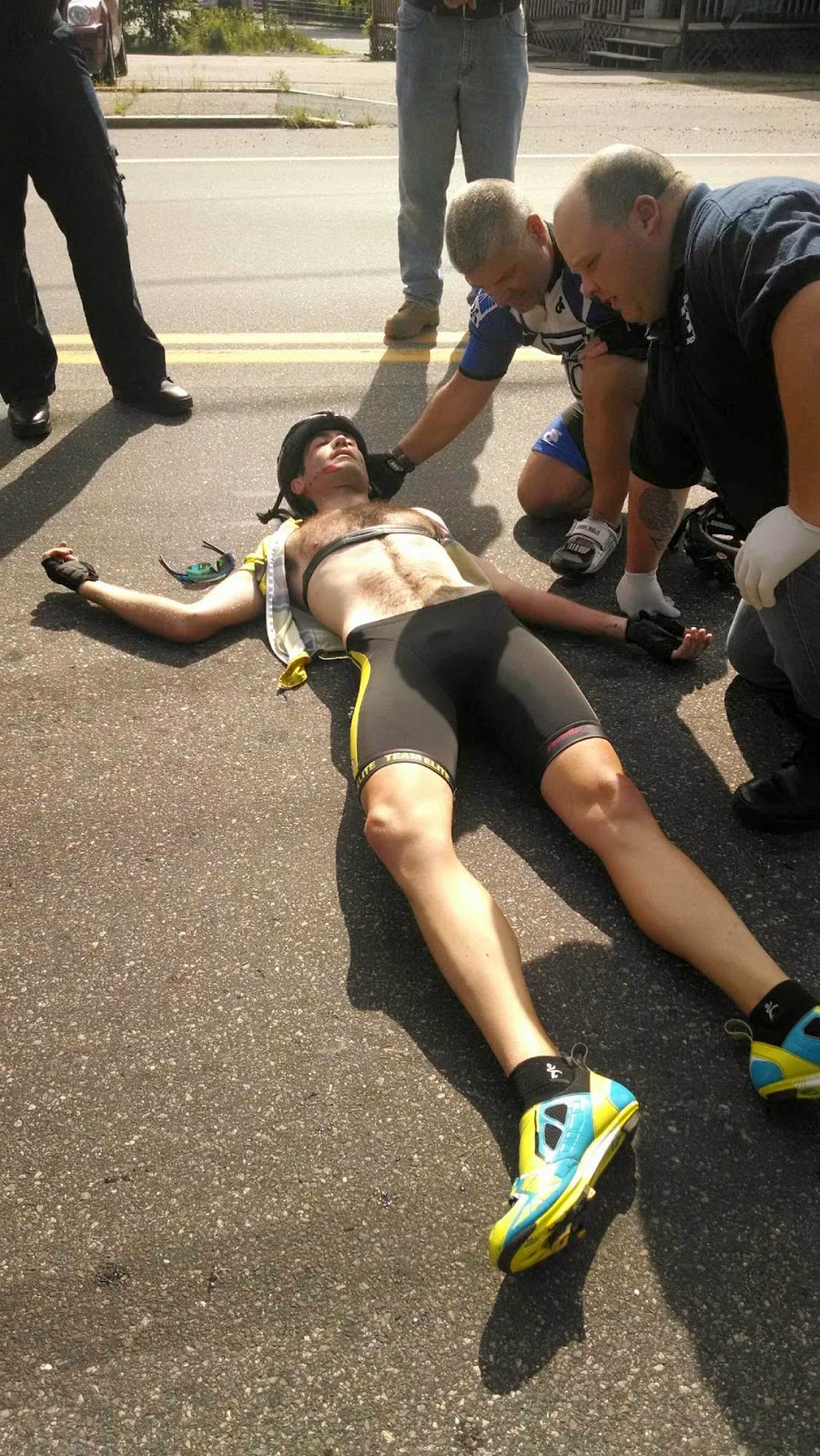 Shameless plug for Road ID: their product saved my bacon here. It allowed people to get in contact with Hannah as well as let them know that I'm allergic to morphine (which is what they wanted to give me for pain ASAP).

We got stabilized, neck collar, strapped to a board (experience I don't ever care to relive. I'd done it once for my brother as part of his EMT certification and I panicked then. You can imagine how this went now.) As they were loading me up, my wits returned: how's the bike? Priorities, people. Priorities.

We got into the ambulance, and the EMTs were good guys. Really kind, asking me questions, keeping me positive. The worst was I immediately cramped in my quad and because I was strapped to the board, there wasn't a damn thing they could do for me in terms of stretching it out. One of my buddies had ridden along and uttered the joke, "First time in an ambulance and you can't be bothered to be hurt enough for them to turn on the lights and sirens. I feel cheated." I returned my first of many middle fingers of the day. EMTs laughed. I tried to laugh, but it hurt too much. 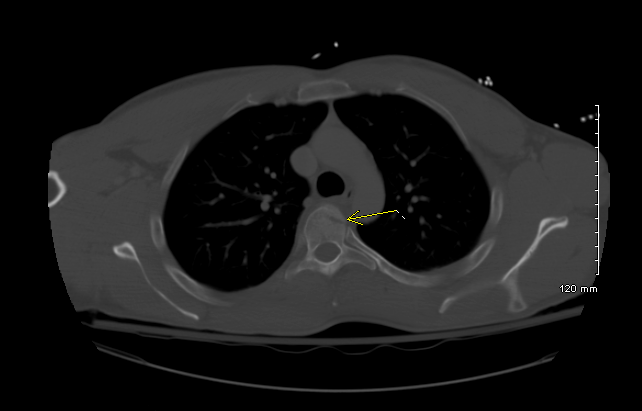 I earned an express ticket to New Hampshire, as Wentworth-Douglas in Dover was the closest open trauma center. I was the priority patient of the day (hooray, I think?) and immediately got into imaging. The thought was that I had landed on my handlebars with my sternum, and so they wanted to ensure I didn't have internal injuries as well as checking my sternum. While they were at it, they also scanned the totality of my spine. They reviewed the cervical spine first, which allowed them to unstrap me from the backboard as well as the neck collar. I felt relieved.

And then they told me I'd fractured my spine.

That's an anterior lateral body compression fracture of T5 at the arrow.

This is me following the diagnosis: 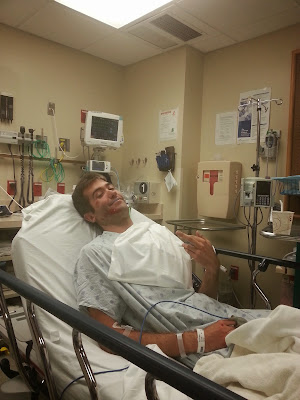 I was told that my fracture was relatively stable (whatever the fuck a fracture of your spine as "stable" means), and to follow up with my orthopedist. I'd also earned whiplash, a mild concussion, road rash on my face and shoulder, an MRI needed for my shoulder (possible rotator cuff injury), and a whole lot of other assorted bumps and bruises.

I was lucky enough to get into the orthopedist on Wednesday. Hannah and I went to see Guardians of the Galaxy beforehand to kill sometime as I was going stir-crazy at home. Went over to Orthopedic Associates in Portland (these guys are good!) and saw my new spine specialist, Dr. Totta. For what it's worth, I highly recommend him. Excellent bedside manner, takes care, explains everything...I really, really like him.

Anyways, during the course of review, he revealed that I also had a compression fracture of T6. Basically, T5/T6 are located just about even with your shoulder blades. On the lucky side, this part of the body is pretty stable. On the negative side, that means the impact was phenomenal in order to wind up with a fracture there.

He wanted me in a brace and described the non-impact stuff I would be allowed to do in the near future for exercise. Stationary bike, elliptical, stair-stepper. Walking, of course. But only so long as it didn't hurt. I was told that my days of driving stick are over for a good long while between the shoulder and the fractures in my spine.

I went over to Atlantic ProCare the following day, to be told that my brace had to be custom-made due to the location and nature of the fractures. He called back over to OA, talked to the doctor, who agreed. And away we went.

So this is what my 16 hour a day companion looks like: 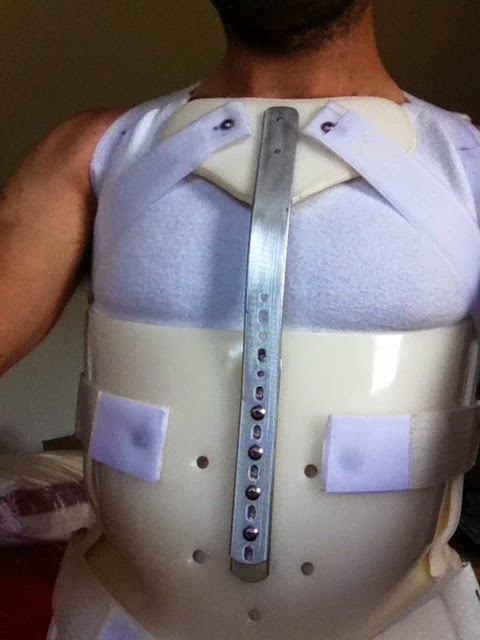 So long as I'm not lying down or taking a shower...this sucker is on for the foreseeable future.

On the plus side, my back pain is alleviated greatly. On the negative, I feel completely and utterly helpless while wearing it.

I'm trying to take small things and make them huge. I can wiggle my toes. I can take the dog out for a walk using a waist leash. I can walk around. I was able to go without narcotics yesterday for the first time since the accident.

My recovery is not going to be easy. I have a lot of physical therapy to do once I get out of this thing. There is still the question of how badly I screwed up my shoulder. I'm hopeful that most of my concussion symptoms have abated.

Next up: August 21st ortho appointment.

You rise, you fall, you're down then you rise again
What don't kill ya make ya more strong.
--Metallica, Broken, Beat, and Scarred.

As many of you are aware, I had a severe cycling accident on Sunday. I'll post more details as I care and can actually begin to process things, but so far the damage includes:
For the most part, updates will be on Twitter (@rrheisler) or Facebook.

I'm not dead. I'm not paralyzed. I am broken. But I will come back stronger.
Posted by Ryan at 9:30 AM No comments: