My Own Nutrition Story

But it hasn't always been that way. In fact, me being as thin as a rail is a recent development. It may look like I'm a natural at this weight, but it's still an unnatural thing for me to see on some mornings. Look to the photo on the left, and well, you can see what I'm talking about. (And for those looking for the easy joke, I'm the one on the left. I know, lobbing 'em in like softballs here.)

That photo is from 2000, and it shows what kind of path I was on, all the way through until January 2004. Food was a method of comfort, to make things OK; the different tastes and the

different types of things to enjoy were my drug of choice. What was I running from? Why? I think a lot of it had to do with my own self-confidence, being painfully aware of my shortcomings socially, athletically, romantically...you name it.

I'd always been large, and had presumed that's the way it was going to be. After putting on the famed Freshmen 15 at the start of my career at Emerson College, I tipped the scales at a groaning 250 pounds.

And I was miserable. Football on the Boston Common was a hell of a chore, reducing myself to a sweating, exhausted, hurt mess. My knees were junk. Everything hurt. My ego? Forget about it. And it was at this point that I made the most important decision of my life...at least, to this point.

I was going to lose weight.

I had attempted dieting in the past. Cabbage soup, no carb, no fat, every kind of fad diet that had existed up to that point outside of Atkins. Sure, I'd dropped a few pounds here and there. But they just went straight back onto the pile, and then some, when I resumed eating again.

No, this was a lifestyle change coming. This was going to be getting exercise every week. This was going to be changing what came into the mouth. Moving food out of the realm of "something to be enjoyed and savored," but instead into "something to fuel my body to do what I want it to do." This doesn't mean that I don't enjoy food, or whatnot; to the contrary, I do. But this is more about recognizing how the body uses it, and enjoying the taste while it lasts, rather than eating just for the sake of the taste of it.

The first few weeks were, shall I say, challenging. The whiff of the fries from the grill area at the dining hall made me swoon. I dreaded my gym sessions, for I hated how I looked in a pair of shorts and a t-shirt, but it was always too damned hot for my beloved sweatshirts and baggy clothing. I dreaded my chest-and-triceps days, for I'd feel like I couldn't move for the next three. Ab workouts were hellacious at best.

Yet I kept going. I couldn't stop. My mind was made up: come hell or high water, I was doing this. It was all or nothing: no half-assing it.

Winter turned to spring and turned into summer. Getting home was one of the best things that ever happened, as I was able to get away from some of the dining hall crutches and into my own routine. For the first time ever, I paid for a gym membership. I even bought a pair of *gasp* running shoes. And I discovered how delicious some of the healthy sandwiches at Subway were, including my staple: the footlong turkey on wheat with lettuce, tomato, onion, pickles, and jalapenos or banana peppers. Calories: 580. I was sold.

I also began to tinker with sports nutrition for the first time, enjoying a pineapple juice, strawberry, and protein powder smoothie after my workouts. Hey! I don't hurt anymore the day after lifting! I can actually go the gym the next day! I was hooked.

May, June, July, and August all fell by the wayside. I knew I had lost some weight, as I was told as much, but I really didn't have much of an idea as to how much. That is, until I stepped on the scale about three days before the start of the semester. I lumbered out of bed, yawned, stretched, and said, "What the hell." I clambered on, rubbed my eyes, and looked down.

Is this damned thing broken? I got off. It spun back to zero. OK, so it's set right. Let's try this again.

WHAT!?!?!?!?! Pretty sure I woke the neighborhood up, outside of my brother, who can probably sleep through World War III. I'd dropped 70 pounds.

And it's been that way ever since. Now, the extra weight has fallen by the wayside as I've lost some muscle mass, and with my focus on running, biking, swimming, and skiing. I still lift, and I lift for different reasons now. I'm not looking to build muscle mass; rather, I'm looking to build muscular endurance. That's another story for another time.

Another loss of poundage came when I donated my gallbladder to the big glass organ jar in the sky. I had gallstones like it was nobodies business, and wound up losing it. And 12 lbs. in the aftermath that just have never gotten their way back onto my frame. What I've been told, by a lot of people smarter than I am, is that when you are losing a lot of fat, your body can't process both what it is metabolizing that way, as well as what you are taking in through the mouth. It then collects and forms those lovely little stones. The benefit, I suppose, is that I can't eat a lot of fried food. I'm also now a bit more sensitive to dairy products...but hey, what can you do.

As it stands this morning, I'm just a lanky dude who a lot of people think, "he's born that way." It's definitely not the case, as my story shows. My lessons to pass along to people: 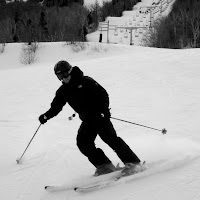 Don't ever tell yourself you can't. If anything, I hope my story tells you that you can.

The Injury Guide (or, How Not to Do Things)

Let's get the obvious out of the way: injuries suck.
The hard part, of course, is to not let them get you down. It's one thing to wind up hurt; it's quite another to wind up getting hurt and letting it eat away at you. It's those little things that nibble away at you on the inside until there's no enjoyment to be derived from those activities anymore. At which point, you should throw in the towel, and find something else to do. The lesson, as always: have fun.
The past year and a half have tried my emotional will. On numerous times, it has seemed like my will has been broken. Another obvious statement: thank God for Hannah, for without her I don't think I would've gotten through some of these times. Here's the definitive list:
The things that I've taken away from all this experience?
Happy training, all. I'll be taking this next week to be thankful, and then it's time to start getting serious. Training program for Rev3 Quassy begins on January 20. Plus, Saddleback opens on December 11.
--Ryan
Posted by Ryan at 5:53 AM No comments:

Welcome to Crashing the Boards.
Why the title? If you know me, I'm a bit of a hockey fan. Establishing a forecheck means a lot of hard work in the "dirty areas" of the ice: literally, crashing the boards to fight for every puck, no matter how much it takes out of you.
It should come to no surprise, then, that this is the philosophy I employ all the time. Whether it's training, or working, or studying, or just getting out after it, I will fight for every single inch that I can get. It's not always rewarding, but when it all comes together, there is no feeling like it in the world.
This will be my forum for thoughts on studying, trying to find a legal job, my training for next year's triathlon ventures, skiing, and what else have you. I've been lucky enough to receive sponsorship from the great people at Sports Bistro for the 2011 season. And hopefully, I'll be lucky enough to succeed.
Till next time...
Ryan
Posted by Ryan at 8:11 AM No comments: